I think G has hit another growth spurt

All the years I thought I'd never be able to have children, and now I have to face the fact that even at 2 months old, my baby boy is starting to grow up. It's almost depressing! He's been sleeping so well, I just shrugged it off when he woke up after 3 hours last night and wanted to be fed again. I say again, because just 3 hours earlier, while at grandpa's, he ate a 5 oz bm bottle, and 8 oz of formula in just 2 hours, which is very unlike him. He usually only eats about 25 to 30 oz a day of bm. I felt bad for giving him formula, but I think everyone knows how things go when grandparents start playing with their grand-babies :D 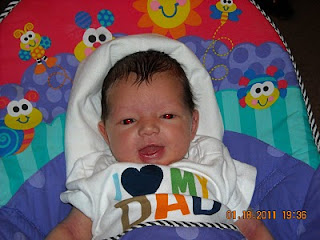 G woke up last night at 10pm, 1am, 4am, and just a short while ago at almost 7am, each time finishing off a 5 ounce bm bottle! I don't know where it's going, but it's making me sad. Thankfully I'm still making enough milk for him.

I never thought I'd be one of those women who would actually feel guilty just because they couldn't breastfeed. I mean really, as long as your baby is healthy that should be all that matters, right? Well, when I stopped nursing and started exclusively pumping, J could swear it was the end of the world for me. Nursing had gone great right from day one in the hospital. I never thought that closeness I felt with G could get any closer, but with nursing it did. Then a few weeks after we brought G home we had to move and J started a OTR job, and between all of that, nursing was just becoming too stressful, I really think for the both of us. When I stopped nursing I honest to goodness thought that closeness (for some reason) would just disappear. I didn't realize how silly I was being. I had been pumping and freezing milk since we brought G home, and had a pretty decent stash built up already by the time I started exclusively pumping. I have noticed though, since only pumping, that I haven't gotten the opportunity to freeze milk. But I've got about 400 ounces stashed away, and I make plenty to feed him during the day with a bottle or two left over for the next day, so I feel pretty confident in my supply. I just hope now I'm able to keep up with him!
Posted by Samantha Pierce at 6:01 AM